The 2016 Presidential Election is soon approaching, and the Republican party seem to be getting all of the attention. Most of that is thanks to Mr. Donald Trump, the outspoken billionaire celebrity who is getting a crazy amount of media attention. With that in mind, we decided to dig up some other republicans that are crazy and outlandish. Here are the top 5 cartoon republicans from your favorite shows, including The Simpsons, South Park, Futurama and more.

He’s the richest man in all of Springfield, so it comes as no surprise that millionaire Montgomery Burns is a registered republican. In fact, Mr. Burns often serves as the Chair of the Springfield Republican Party. In “Brawl in the Family” (Season 13 Episode 7) the episode opens with a meeting of Springfield’s Republican Party, where we hear Mr. Burns asking for suggestions of what evil they should undertake for the week. Other Springfield Republicans at the table? Krusty, Dr. Hibbert, Rainier Wolfcastle, Fat Tony, and, of course, The Rich Texan all vote red.

Mr. Burns also openly campaigned for Mitt Romney during the 2012 Presidential Election, and was ultimately devastated when Obama ended up winning: He was the 37th President of the United States, and now he’s the 30th President of Earth. In Matt Groening’s Futurama, Richard Nixon’s head is preserved in a jar and well alive in the year 3000. He is a no non-sense leader who leans dangerously toward the side of evil, with several episodes using him heavily to drive the story.

Richard Nixon’s head is very clever in the show, as demonstrated in the famous episode A Head in the Polls. Nixon skates around the law when he says that “”nobody can be elected more than twice”, meaning he can run again while his head is attached to a different body.

It’s not a shocker that blue collar Texas resident Hank Hill votes republican. In one episode he is heard saying that he “misses voting for Ronald Reagan.” However it should be noted that although Hank is a republican, he has had moments of doubts. In the season 5 premiere “The Perils of Polling”, Hank gets the great opportunity to shake the hand of then Texas Governor George W. Bush. Unfortunately Hank discovers Bush has a limp handshake, and begins to question his belief of the Republican Party.

Of all the fictional republicans on this list, there’s no doubt that Stan Smith is the most enthusiastic. He is a gun toting member of the CIA, and refuses to eat French toast simply because of its name. He has a strong dislike for democrats, specifically Susan Sarandon, Jane Fonda and Michael Moore. He strongly opposes gun control and abortion, and is always arguing with his daughter Haley over her hippy, liberal views.

Who would’ve thought that a gay, transgendered person would vote republican? In Season 12’s “About Last Night”, the democrats of South Park (especially Randy) celebrate Barack Obama’s victory over John McCain in the 2008 Presidential Election, while the republicans all drown their sorrows and lament that the world is going to end. Among those republicans is none other than Mr. Garrison, and that’s just the beginning of it.

Most recently in Season 19 Mr. Garrison announced that he’s running for President of the United States. We can only assume he’s running as a republican, given that the episode (“Where My Country Gone?”) centered around Garrison wanting to build a wall to keep out immigrants, mirroring the desires of presidential candidate Donald Trump. Oh, and something else happens in that episode to Donald Trump, but we’ll let you find that out on your own. If you’re curious, here’s a preview: 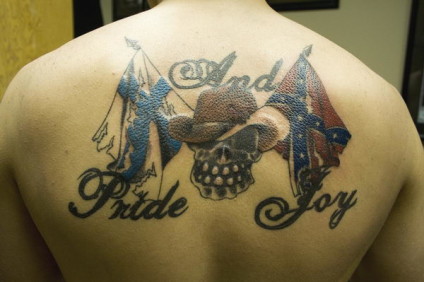