The unmemorable cast of characters was part of the reason why The Cleveland Show sucked, but Lester shined bright among them. Known for being the redneck of the group, Lester donned a sweet mullet and had an insanely fat wife. No wonder he was always at the town’s strip club, Arnold’s Whoreshack. 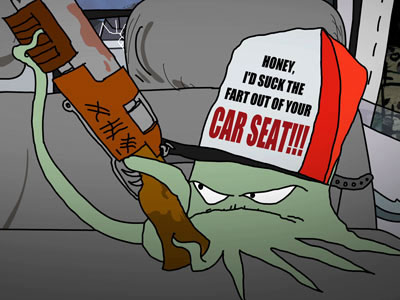 Easily the most foul-mouthed redneck on this list, Early is a depressed alcoholic who also happens to be a squid. He breaks the law on the regular, and whether he’s bootlegging alcohol or just getting high, he’s always entertaining. Bonus points for the different trucker hats he would wear each episode that would say things like “Too Funk to Druck” and “World’s Greatest Illegitimate Daddy.” THEY TOOK OUR JOBS! Sure we could have picked Jimbo or Ned from South Park, but Darryl gave us one of the best catch phrases the world has ever known. He’s only a minor character, but whenever the show needs a pissed off redneck to rally up the troops, Darryl is the guy. Like many of the best characters in The Simpsons, Cleetus started out as an unnamed background character that was nothing more than a go-to for a cheap laugh. He was eventually given his name in Season 7, and since then has become one of the funniest secondary characters in the show’s history. He may be a dumb and stereotypical backwoods redneck, but that doesn’t mean we don’t love him. What can be said about Hank Hill other than he’s the greatest fictional redneck of all time? Although it was revealed in one episode that he was born in New York, Hank is a Texas man through and through. He drinks cheap beer, drives a truck, watches football, and knows the simple pleasures of mowing his lawn. The Most Interesting Redneck Wrestlers of All Time 19 Animals Who Are Complete Dicks